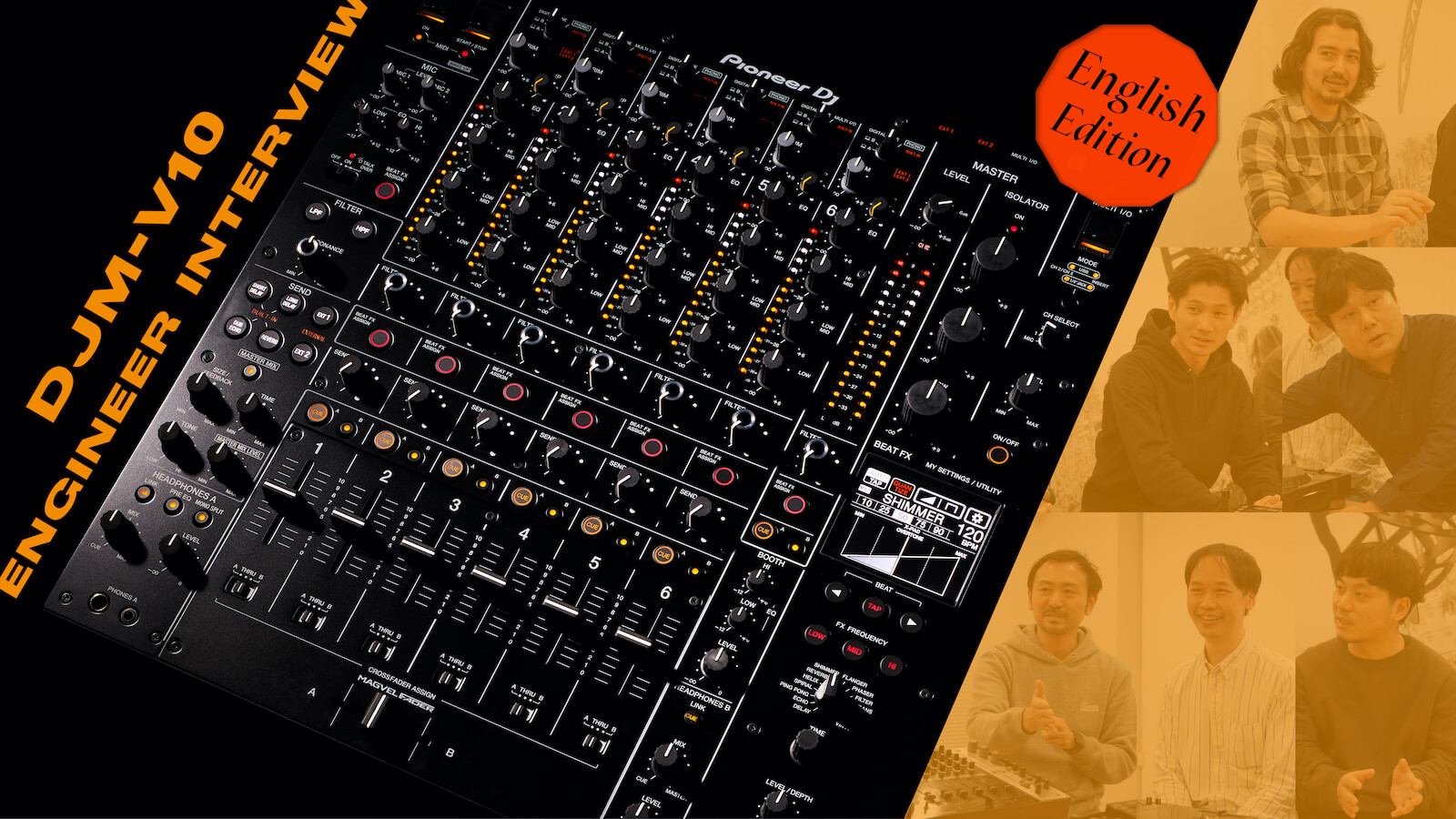 SEND FILTER and BEAT FX, take the fullest control of your sound 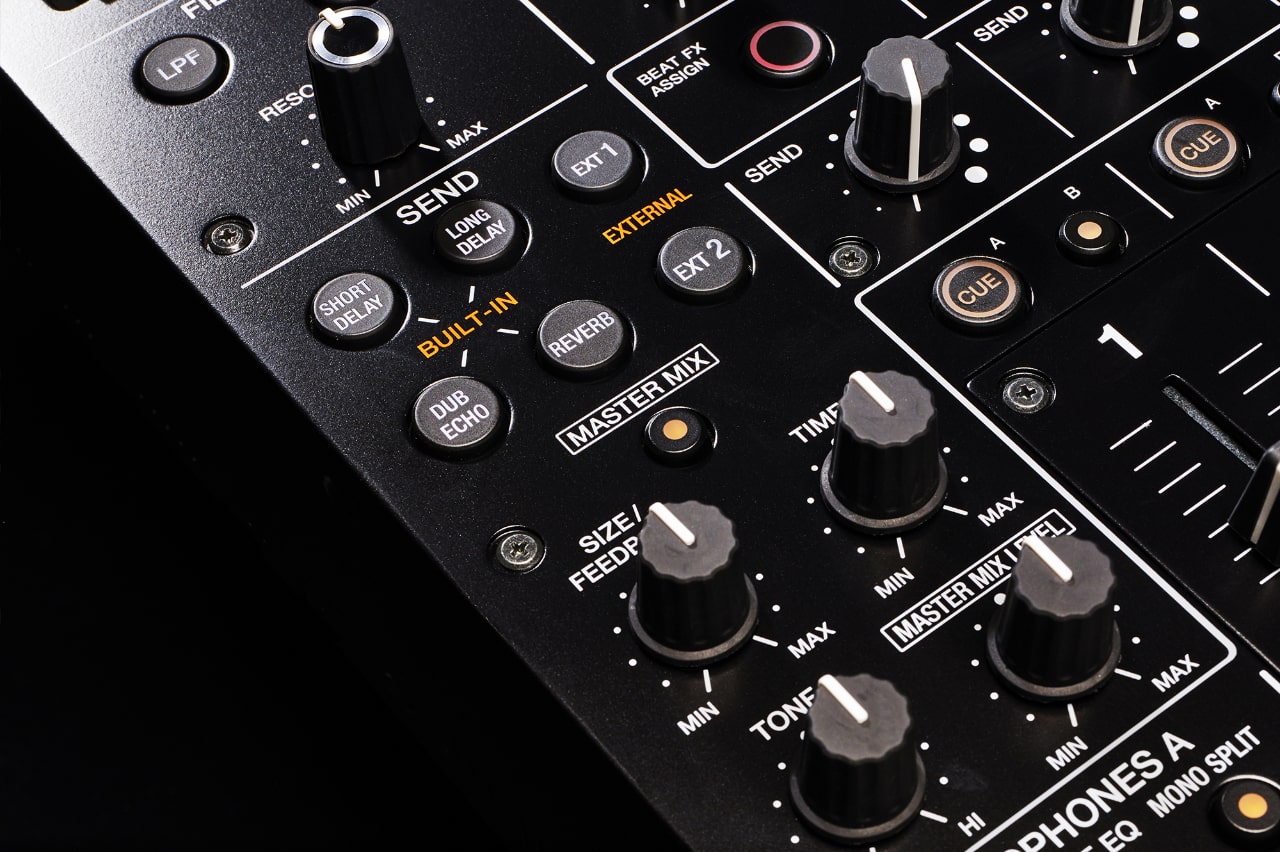 As for changes in the effects, one very notable thing is that the Filters are now independent from the others. What brought you to this drastic change?

Montpetit: To start off, we reconsidered what you want to do with Filters, when defining Filters as a basis for “tailoring your sounds”. Then, we started to see two main cases: “twisting for a sweeping effect, or turning full-blast for a bold intonation” being one, and “giving a subtle change to a tone” by killing the LOW with high-pass for example, being another. In this case, we pictured the ideal would be that, if the Filters are independent and are ready to use just by twisting a knob, not that you have to select your Filter among the other effects. And that’s why we separated it.

To effectively cover the two use cases, we set a higher resolution and adopted a fully twistable knob same as DJM-1000, which enables both detailed adjustments and bold performances much easier to operate.

Now only Dub Echo, which used to be in Sound Color FX, is classified in Send. Is Send in DJM-V10 equivalent replacement for Sound Color FX?

Montpetit: For Send, our primal intention was to make performances with external effectors easier, such as a guitar pedal, which is an increasing recent DJ performance trend. At the same time, it has 4 Built-In Effects to enable the same level of performance without external effectors. In terms of its layout, Send is where Sound Color FX used to be placed. We also followed the immediacy and the simplicity of Sound Color FX, where you can “just press the button and turn the knob to apply effects”.

However, we wanted to avoid you can only make the same sounds from our previous models. So, we added parameters that our users can modify the tones and expressions they want to create, strengthened its extensibility, recreated each effect. But we replaced Space in Sound Color FX to Reverb in DJM-V10, didn’t we?

Koizumi: That’s right. In Sound Color FX, Space was positioned as a reverb effect, and Dub Echo was positioned as a delay effect. We recreated and rebuilt in these effects from scratch, including Delay and Reverb, into the suitable effects in Send & Return. Even though we already had the same name effects (Delay, Reverb and Echo) in our previous Beat FX, when compared to external effectors, our Beat Effects tended to have very stiff impressions with full of digital effect-ness.

That’s why we selected Delay, Reverb and Echo which can blend naturally with instruments input, while referring to external effectors. Also, that’s why we aimed for more analog and natural feelings, despite our previous Built-In Effects, and designed sounds to match the overall warm sound quality of the mixer itself. 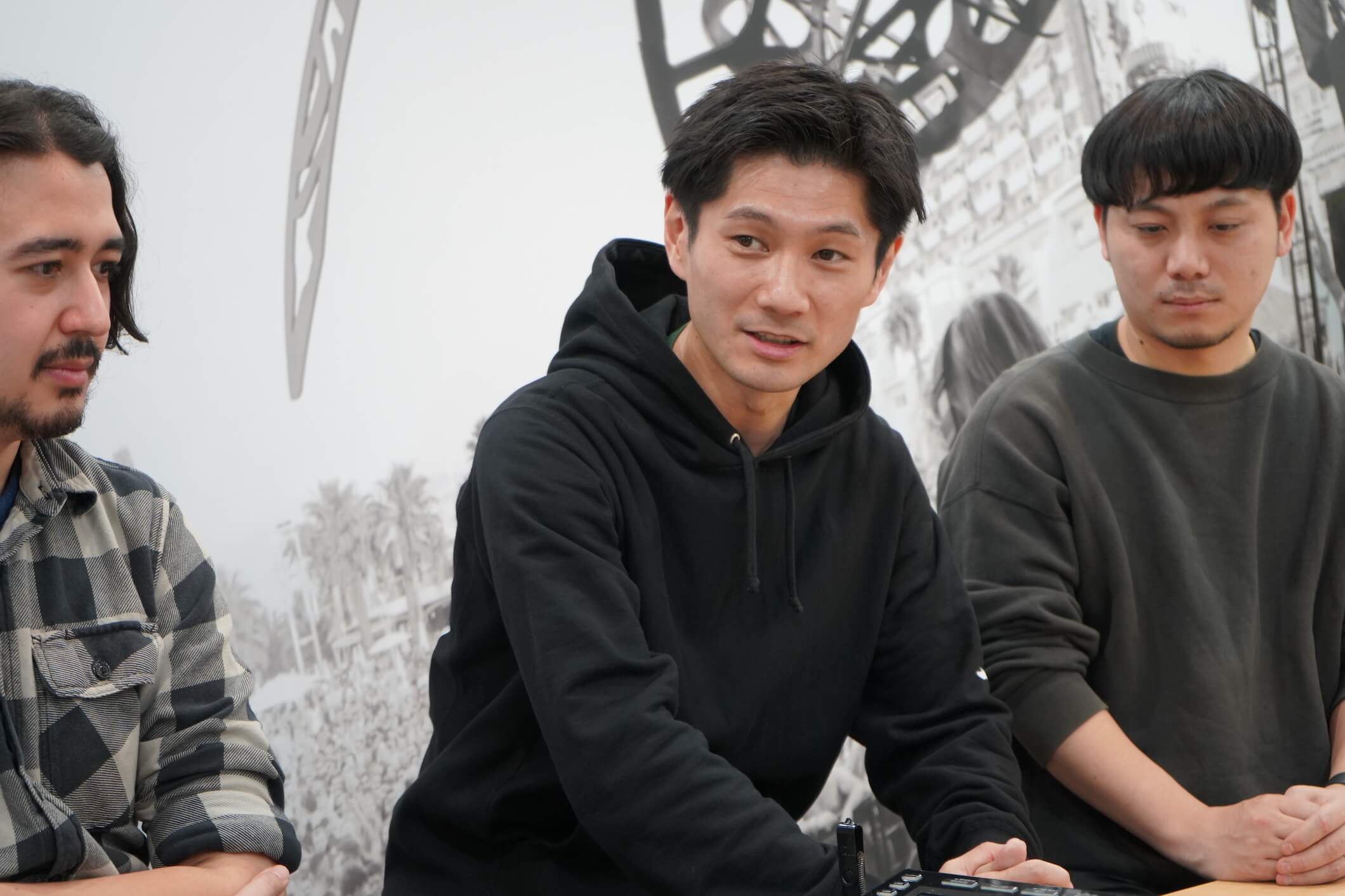 Montpetit: For [being able to perform] more intuitively and quickly, we also adopted Master Mix which can mix sounds from Send & Return directly in the Master. In normal Send & Return, it requires a channel to send sounds and another one to receive returned sounds, but if you use Send with Master Mix on, you don’t have to worry about a returning channel, which makes it much easier to use external effectors through Send.

When you turn off Master Mix, you can use normal Send & Return by switching to BULT-IN for Built-In Effects, or by switching to EXT1/EXT2 for external effectors. Here, you can apply even more effects with EQ, Filter or Beat FX on top of your returned sounds, so it’s completely up to a user how to layer different effects without limitation.

When you let me touch [DJM-V10] before this interview, I felt like Built-In Effects and the parameters in Send alone can be even enough with such high degree of flexibility. And when you also have Delay, Reverb and Dub Echo on top of that, I might consider not to add any external effectors… Still, if anyone wishes to add an external effector, what do you recommend [to use]? Do you have particularly favorite one you tried during the research and development?

Montpetit: Personally, I tired what happens if use Distortion via Send… that, to be honest, wasn’t for me. [laugh]

Kuramoto: For me, it was quite striking that “Send FX” changed to “Send” during the printing design stage. I remember when we were discussing on Send with Sugai and other team members, we mentioned “we can connect a Level Meter’s rack mount as an external devise, or we can even add an isolator”. I felt getting rid of “FX” [from its name] is crucial to not limit that flexibility.

Montpetit: It was intentional not naming it “Send FX” ultimately: this knob is just here to operate Send, so external devises don’t necessarily have to be effectors to sculpt your sounds. For example, it can be a lighting equipment that responds to sent sounds, or it can be a sampler or a looper for one phrase in your track. The bottom line is, whatever you send your sounds to, we are happy if you can fully express your own style.

For Beat FX, you’ve changed the order of the Effects and newly added Shimmer, right?

Kuramoto: Wow, I didn’t expect you even noticed the order there…!

Montpetit: Precisely. We reviewed the order in Beat FX primarily thinking “DJM-V10 should be positioned differently from DJM-900” again, but the effect orders of DJM-900NXS2 have their own advantages too. As a club-standard equipment, no matter where you go, you can perform smoothly, knowing that it’s always in the same order; you know “turning all the way to the left should be Delay” for instance. So far, the newest effect had been added on the very right, Helix being the right end in DJM-900NXS2 for example. However, when we conducted a research on “how often Helix is used”, we ended up getting responses like: “what is Helix to begin with?” or “I didn’t even notice this Effect exist”. Here, we strongly felt many people are missing out so much [because of the effect order]. This is why we rearranged the grouping and the order of Effects: times-based effects from the left, modulation effects toward the right. In this way, you’ll be able to guess another effect based on what’s before and after, and be able to try out an effect that you wouldn’t have used otherwise. [On DJM-V10,] newly added Shimmer for example, we hope you can feel “let’s try this one, if it’s like reverb!”. 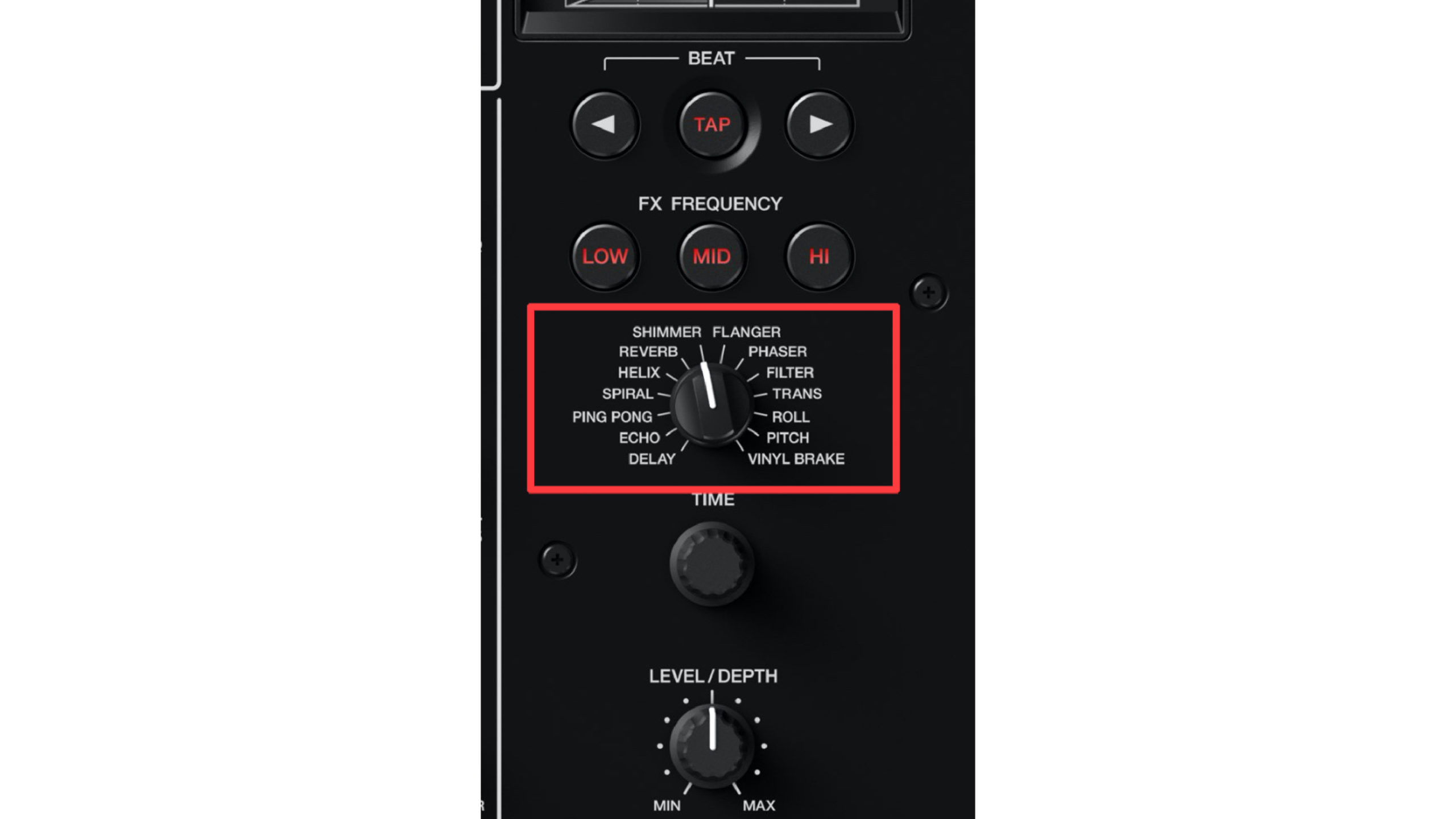 So, Shimmer, what kind of effect is that?

Montpetit: Shimmer is an effect getting more and more attention from DJs performing with external effectors. From our hearings on what effector equipment they bring in, it turned out that reverb effectors are most popular after all. But especially among those reverbs, quite a few people were using Shimmer for its glittering and unique effect. This trend is particularly strong for DJs play techno and tracks with minimum elements. We thought it would be interesting if that was in Beat FX, so we decided to add it. After that, we conducted numbers of researches and examinations for “what makes Shimmer great” by creating prototypes, trying them out on a track or on a synthesizer, until we finally completed our take on Shimmer.

Koizumi: Since there was no correct way for this development, we tried out many different procedures, continued to test what each [of our prototypes] sounds like, then refined it gradually.

Sugai: Shimmer started to get popular quite recently but now there are many of them in the market. But most of what’s available now are, for instance guitar pedals are made to fit into guitar sounds, not really something intended for DJ performances. Also, each product tends to have very distinct sound profile from each other, sometimes made me think “wait, this is also Shimmer?” while comparing them. We consolidated our ideal for Shimmer in DJM-V10 as we were testing it, upon analyzing “what’s the nature of this effect”.

Montpetit: Regarding Beat FX, FX Frequencies were also modified. It turned out that HI frequency band was too high, when we examined it while reviewing the way we divide Isolator frequency.

Sugai: That’s because FX Frequency on DJM-900NXS2 was, to begin with, designed to correspond to sounds in 3-band EQ Isolator. 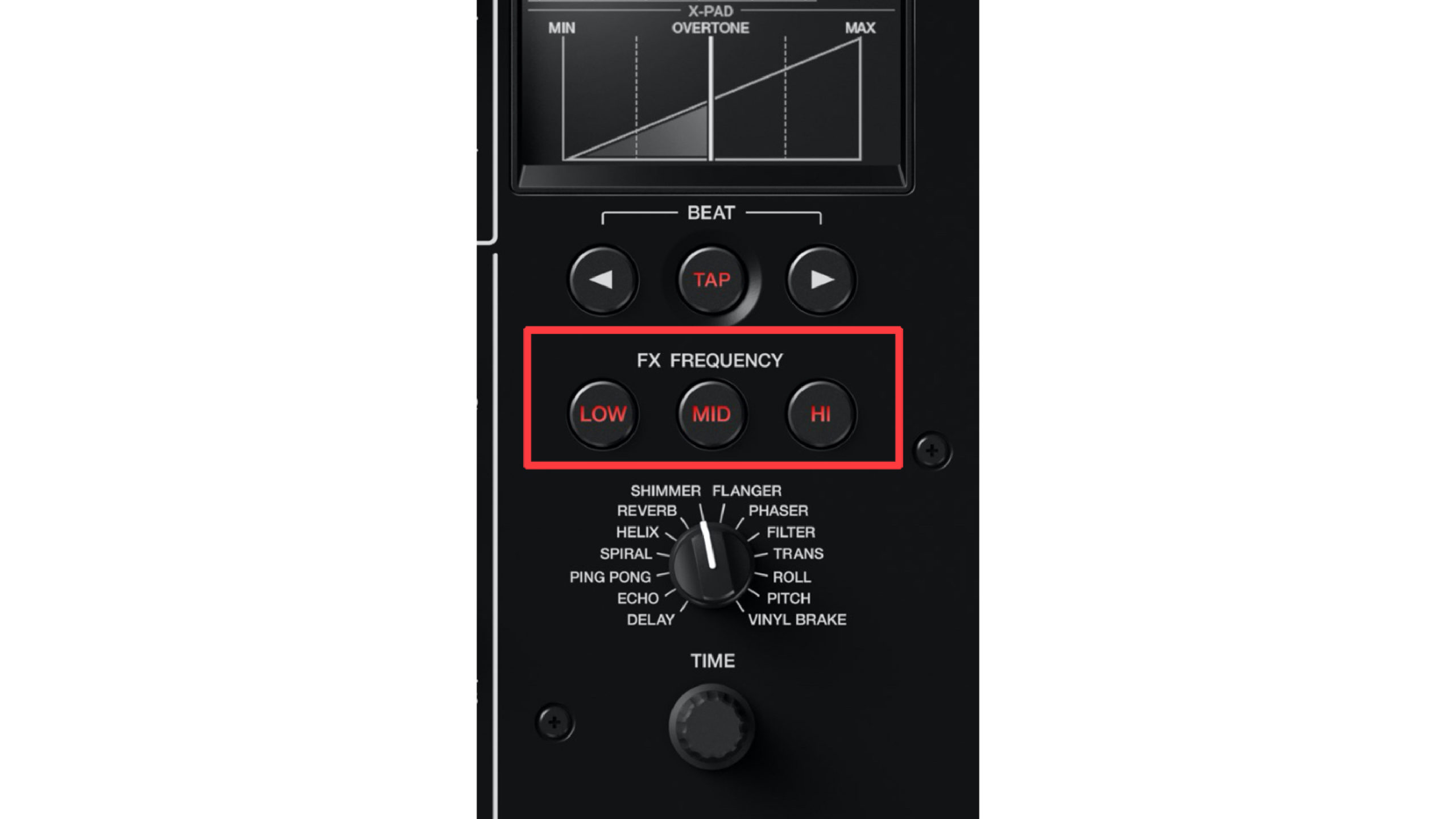 Koizumi: If you wanted to apply an effect only on HI, with FX Frequency being off for LOW and MID, HI frequency band was way too high and you couldn’t barely hear that effect. On the contrary, MID turned out to be too wide.

Upon this development, we reconsidered the balance where LOW, MID, HI each can naturally carry on [effects with] Beat FX, so that you can clearly hear effects applied only on HI, or you won’t go too much when you use effects only on MID. We’re sure we’ve designed FX Frequency much easier to use.

Montpetit: While observing venues, [we learned that FX Frequency was] almost only used to kill LOW, too. One time I personally tried on DJM-900NXS2 to apply Effects only on HI, for a rolling effect on high hats. But then, strong lower parts of high hats got cut off for some tracks. After reviewing this part, now we can effectively roll only high hats, by lowering HI frequency band on FX Frequency.

Next page:【 DJM-V10, diligently designed to be user-friendly for both DJs and PAs 】